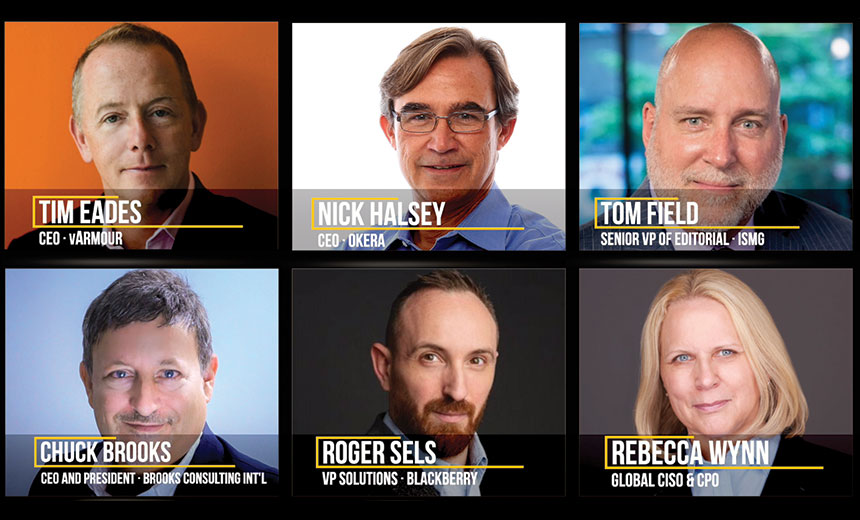 CEOs and CISOs on Managing Visibility, Accessibility and Risk.

Almost every organization has adopted cloud computing to some extent, and with this great power comes great responsibility. How are cybersecurity leaders managing visibility, access and risk? We asked this exclusive panel of CEOs and CISOs, and they shared frank and thoughtful advice.

Click here if you have a question about this panel

Participating in this latest panel discussion are:

With over 20 years of leadership experience in sales, marketing and executive management at the CEO level, Eades has expertise in driving growth for computing, security and enterprise software companies. He joined vArmour as CEO in October 2013. Prior to that, he was CEO at Silver Tail Systems from March 2010 until the company was acquired by RSA, the security division of EMC, in late 2012.

Halsey has been the CEO of Okera since March 2020. He previously has served as a CEO and COO and in other executive roles over a 25-year career in data and analytics, most recently as CEO of Zoomdata. Halsey helped start several foundational analytics companies, including Brio Software, Tableau and Biz360, and he helped lead others, including Jaspersoft, Alphablox and Keynote Systems, to successful exits.

Brooks, who heads a consultancy, is a globally recognized thought leader and evangelist for cybersecurity and emerging technologies. LinkedIn named him as one of “The Top 5 Tech People to Follow on LinkedIn.” He was named by Thomson Reuters as a “Top 50 Global Influencer in Risk, Compliance” and by IFSEC as the “#2 Global Cybersecurity Influencer” in 2018.

As a global CISO and chief privacy officer, Wynn is a “big picture” thinker who has over 20 years of experience in information security, assurance and technology. The recipient of numerous awards, including 2017 Cybersecurity Professional of the Year, she has been described as a “game-changer who is 10 steps ahead in developing and enforcing cybersecurity and privacy best practices and policies.”

As a vice president at Blackberry, Sels serves as an adviser to clients’ C-suites with a focus on maximizing the value and impact of their cyber programs. Sels has more than 20 years of technical and leadership experience in cybersecurity. Before joining BlackBerry Cylance, he was the founding CISO at DarkMatter LLC, a cybersecurity consulting firm.

Outline of This Episode

In this Cybersecurity Leadership panel discussion hosted by ISMG and CyberTheory, these C-suite leaders discuss:

Click here to view the rest of the series
Category: Leadership Series